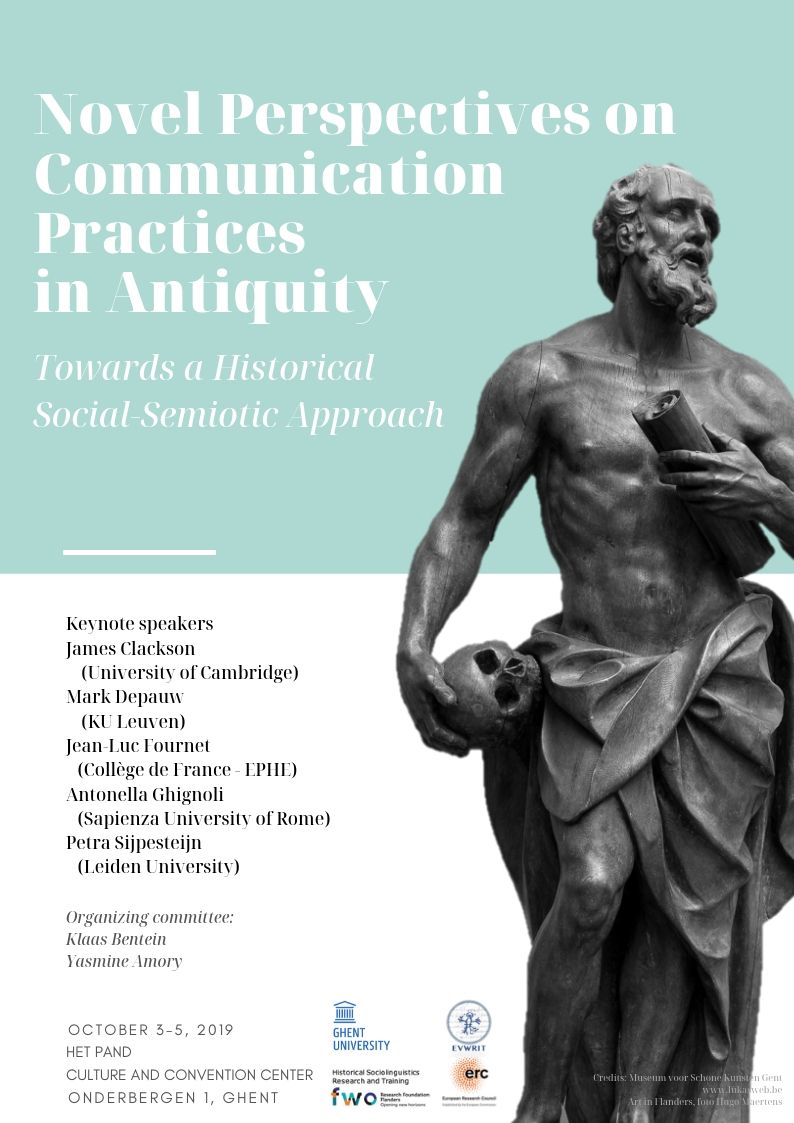 Sociolinguists initially showed little concern for texts from the past, William Labov, the founding father of sociolinguistics, famously characterizing historical linguistics as ‘the art of making the best use of bad data’ (Labov 1994:11). Nowadays, historical socio-linguistics, too, has come to maturity as a sub¬discipline (see e.g. Conde-Silvestre & Hernandez-Campoy 2012), with researchers trying to identify dialectal relationships between language and society. Contemporary sociolinguistic insights form the basis for these descriptions, but given the complexity of the subject, a radically interdisciplinary approach has been in the making, combining insights from corpus linguistics, historical linguistics, philology, and semiotics.

One question which has received relatively little attention so far is to what extent other ‘meaning-making’ dimensions could and should be involved in the investigation. In recent years, scholars such as Bob Hodge, Gunther Kress and Theo van Leeuwen have explicitly drawn attention to the ‘multi-modal’ nature of communication, arguing that people also use – next to language – visual, gestural, musical, choreographic, and actional resources to make meaning. Remarkably, however, the new discipline of Social Semiotics is currently restricted to the analysis of modern-day texts. Parallel to what we have seen with the development of sociolinguistics, there is little interest in texts from the past: one recent textbook, for example, is explicitly entitled ‘Multimodality. A social semiotic approach to contemporary communication’ (Kress 2010; our emphasis).

The main aim of this conference, which forms the opening event of the ERC-project ‘Everyday writing in Graeco-Roman and Late Antique Egypt. A socio-semiotic study of communicative variation’ (2018-2023; www.evwrit.ugent.be), is to explore to what extent it is possible and desirable to found a discipline such as historical social-semiotics, parallel to historical socio-linguistics. Such a novel, interdisciplinary approach is particularly relevant for ‘everyday’ documentary texts: since these texts represent autographs, their external characteristics can also be brought into the interpretation. Jean-Luc Fournet (2007), for example, has recently argued for a ‘paléographie signifiante’, noting that ‘l’analyse matérielle d’un document peut être porteuse de sens’ (2007:353), not only when it comes to text type, but also with regard to the socio-cultural context of writing, and the provenance of the document. Other external characteristics to be considered as expressions of social meaning (functioning as ‘semiotic resources’) are – but are not limited to – writing material, document format, and language choice. Their analysis reveals information concerning hierarchy, status and social relations.

The main focus of the conference will be documentary texts from the Mediterranean region, roughly spanning the period from the first millennium BCE to the first millennium CE. Next to the study of specific (linguistic, palaeographic, material, etc.) features, we consider the following questions to be of particular relevance:

– Which ‘semiotic resources’ should be taken into account when studying Ancient texts?
– How are these different semiotic resources interrelated?
– Can certain semiotic resources express types of meaning which other resources cannot?
– Which types of social meaning are expressed through communicative variation?
– How are these different types of social meaning related to each other?
– Is it possible to identify larger patterns of co-occurrence, extending linguistic concepts such as ‘register’ and ‘genre’ to other domains?
– Which diachronic changes can be observed?
– How do ‘everyday’ texts from Egypt compare to texts found elsewhere?
– Which digital tools are required for the discipline of historical social-semiotics?
– Which theoretical concepts from social semiotics can be further developed?
– What role do scribes play for the social-semiotic analysis of ancient texts?
– What kind of standards were there for ‘everyday’ communication practices?